The Association for the Advancement of Creative Musicians is arguably the most important music collective of the past 60 years. The most enduring of the self-governing organizations emerging from the jazz avant-garde of the 1960s, the AACM provided a platform for South Chicago’s black working-class composers and musicians, transforming the musical landscape. By inventing new forms of composition and improvisation and fighting for their place in the larger world of new experimental music, AACM members have broken down the racist and classist barriers that artificially separate jazz and classical composition. They also engaged successfully with black popular music, from blues, funk and reggae to hip hop and house. And through George E. Lewis – the first African-American composer to be invited to Ircam in Paris – the AACM has also been at the forefront of computer music. AACM embodies a liberated future where there are no limits to creativity. His influence is vast, from European free improvisation to Afro-futurism, from Chicago post rock to 21st century Brooklyn avant-garde.

The AACM was founded in 1965 by Muhal Richard Abrams, Jodie Christian, Steve McCall and Phil Cohran. Its charter committed the organization to “nurture, perform and record serious and original music”. By calling themselves “creative musicians,” AACM members rejected the genre, refusing to be bound by expectations of what a so-called “jazz” black musician should be. They wanted to be taken seriously as songwriters, but their jazz background allowed them to recognize that songwriting doesn’t start and end on the page. Whether working with traditional notation or graphic scores, AACM composers have created creative frameworks, showing that composition and improvisation are two sides of the same coin. Moreover, this democratic approach calls into question the composer-conductor-musician hierarchy. As Anthony Braxton wrote in his For Threesome (1978) note that “as is always the case with creative music, actual creativity is an affirmation and a testimony of all those who participate”.

There is no AACM “sound” as such. Members were encouraged to explore unconventional instrumentation, extended techniques, and graphic notation. Extra-musical elements were adopted: poetry, dance, visual art. The flourishing of creative musicians goes hand in hand with a strong commitment to social justice, community organizing and education. Through formal instruction, community ensembles and jam sessions, the AACM has nurtured several generations of creative musicians.

In his excellent new book, Sound experiences: the music of the AACM, Paul Steinbeck argues that the AACM founders’ dream of creating a space for African-American composers in experimental music was finally realized in 2016, when Henry Threadgill was awarded the Pulitzer Prize for Music. The Pulitzer has always been slow to recognize the achievements of African American composers. In 1966, his committee vetoed the nomination of Duke Ellington, an outrageous act of racist scrutiny. Today, there is still resistance to the decolonization of classical music, especially from right-wing culture warriors determined to defend the supremacy of Western tradition. But there are positive signs of change, with AACM composers leading the charge. Last year’s BBC Proms featured Lewis Spirits in flux, a superb piece for orchestra and interactive electronics. Thanks to the groundwork of Threadgill, Lewis, Braxton, Mitchell and others, young non-AACM composers like Tyshawn Sorey can also fill these spaces. 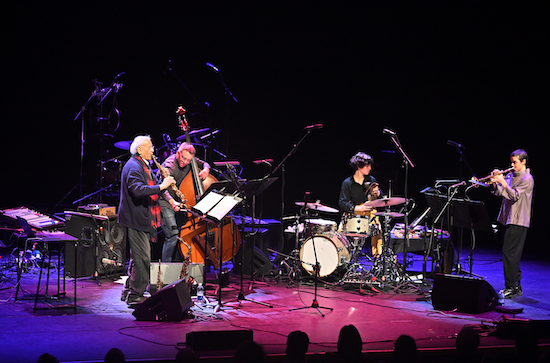 The EFG London Jazz Festival’s double headliner of Threadgill and Braxton at the Barbican further affirms their status. It’s Threadgill’s first time performing in the UK in over a decade, and although Braxton has visited these shores more regularly, it’s the first outing for his New Quartet, an international ensemble made up of the brilliant Portuguese trumpeter Susana Santos Silva, Italian bassist Carl Testa and Brazilian drummer Mariá Portugal. As journalist and host Kevin Le Gendre points out in his introduction, Braxton’s music can be experienced in many contexts, from orchestra to opera, large ensembles to solo.

The last time I saw Braxton was in Berlin in 2019, where he played sonic genome, a six-hour sound environment with 60 musicians. Between orchestral pieces, the musicians moved away to form smaller groups, performing scores from Braxton’s “Ghost Trance” series. Audience members, or “friendly experimenters” as Braxton puts it, could choose their own adventure, follow one band before moving on to another, or find a place to soak up the sonic clash of the various ensembles moving through the space. In the final hour, Braxton strolled through the atrium, forming an impromptu trio with another saxophonist and a bassist. As their improvisation drew to a close, the building echoed with the sustained tones of the entire ensemble moving through space, as if the walls themselves were singing. It remains one of the greatest musical experiences of my life, deeply moving yet immensely fun.

Braxton’s main small group projects in recent years have been ZIM, in which Tomeka Reid, Brandee Younger, Taylor Ho Bynum and other young masters negotiate a new system of composition, and a Standards Quartet with British musicians Alexander Hawkins, Neil Charles and Stephen Davis. . The New Quartet is somewhere between them. The music is carefully composed, with the musicians following Braxton’s score and gestural cues. And while there are only fleeting glances at the conventional language of jazz explored in the Standards Quartet, the musicians’ sensitivity to improvisation is key to opening up the structures. There are several fully formed passages, from the majestic opening saxophone melody and trumpet counterpoint to the final insect march. Shivering exchanges flow in melodies of disarming grace.

At times, the musicians clearly articulate Braxton’s types of language, the musical elements that form the basis of his improvisations: a trill, a sustained tone, a jerky salvo. Each musician brings their own character to the music: independent voices within a codependent structure. Santos Silva’s silvery tone and whispering embouchure effects complement Braxton’s smooth, lyrical tone, while Portugal’s intuitive phrasing and use of shakers on the drumheads bring a slightly ramshackle quality to the stop-start rhythms. . Testa provides solid bass support, stepping forward for the occasional fleet solo. Using a laptop and mixing board, Braxton weaves high-pitched sine waves and bubbling synth tones into the texture. This fifth element is subtle, but certainly not superfluous. The overall effect is to create an otherworldly electro-acoustic atmosphere, but at times the AI ​​kicks in, unleashing a soaring harmonic tone against Silva’s shaky lines. 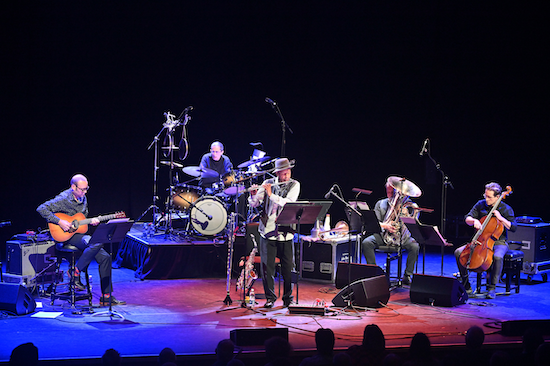 The ZIM Ensemble I saw at Café Oto in London in 2018 approached Braxton’s compositions with a freedom that comes from a sustained engagement with musical language. The New Quartet isn’t quite there yet, but this first performance seems to be the start of an exciting new chapter in Braxton’s music. It’s exciting to see these wonderful artists making the music their own, fully embodying the role of creative musician. For Braxton himself, it’s a learning process. During a trio section, he makes changes to the score, presumably reshaping the music in response to what happened before. Braxton is too often referred to as cerebral, robotic, but at times like this his intuition and playfulness shine through beautifully.

Zooid has been Threadgill’s core set for over a decade. Currently a quintet, it includes Threadgill on saxophone and flutes, Liberty Ellman on acoustic guitar, Jose Davila on tuba and trombone, Christopher Hoffman on cello and Elliot Kavee on drums. Their command of the language and heightened level of interaction results in music that is breathtaking in its complexity, but also graceful, even funky in places. It’s certainly possible to draw a line between Zooid and Threadgill’s earlier projects: the flowing polyharmonic lines and springy rhythms of Air, the unconventional instrumentation of Very Very Circus, the gnarled strings of Makin’ A Move. Still, it’s really its own project, a people will be trying to figure it out for years to come.

As Threadgill producer Yulun Wang told me in 2019, “The whole idea of ​​Zooid is to invent a new form of group interaction. Essentially, it asks each musician to play and improvise according to a system of prescribed intervals. To my ears, this is a way for Henry to impose counterpoint [and] make sure everyone fits together while doing their own thing. And that’s why you’ll never hear another band that sounds like that.

So what does it look like? And what the hell is going on? Despite all the intense concentration required of musicians, they never seem so studious. During the long first stretch, the band plays with contained volume and attack, but there is a lot going on. Ellman and Hoffman absolutely rock it, their maze lines and chordal vamps somehow intertwined yet independent. Davila’s tuba ostensibly plays the bass role, and while its patterns help ground the music, it’s free to roam the instrument’s upper range. Combined with Kavee’s painterly touch on the kit – there’s a section where he only plays cymbals – this gives the music a quite remarkable lightness and clarity of form. It may take a while to tune, but Threadgill rewards us in the final section with a bright alto sax lead, melodic sound lifted by understated swing. This is my first time seeing Threadgill. As it should, this left me with as many questions as answers.

The night before, the Barbican hosted CHICAGO X LONDON, featuring a younger generation of musicians from both cities. The transidiomatic musings of Angel Bat Dawid and Ben LaMar Gray drive the AACM forward. But despite their senior status, Braxton and Threadgill remain on the cutting edge. Next-level creativity, from old to future.