Frowning in the blinding midday sun, with his camera held like a weapon, Isaac Nabwana shouts “Action”, demanding that chaos be unleashed. Three men in military fatigues scream in panic at each other, only to turn their anger on monsters made from the plastic waste normally found strewn across vacant lots. Pistols and shotguns are drawn, but their bodies are pushed back by strange forces; flying backwards, the three men collapse into a heap. Their over-angled boots crumble into the Ugandan dirt, finally coming to rest in clouds of orange dust. “Cut,” Issac shouts with a broad smile and the whole team bursts into laughter and applause. As the drums sound, it sounds more like a party than a film set.

I have just walked into the home of Ramon Studios, otherwise known as Wakaliwood – Uganda’s most ambitious filmmakers. For over a decade, their feature films of Kung Fu fights, hilarious special effects and loud explosions have created a cult following across Uganda. The 2010 movie Who killed Captain Alex?, now viewed almost 8 million times on YouTube, has reached an international audience and changed everything for Isaac and his wife Miriam, who acts as studio director of their one-story complex in the slum village of Wakaliga. , Kampala. They shoot where they live.

The bold passion and determination on which Wakaliwood is built has taken Isaac’s films out of the slums and around the world to inspire other filmmakers to follow suit. Last summer, their project took a step further, when they were invited to the Documenta Art Festival in Germany to screen their new film. soccer commando. Isaac is very clear about how he thinks movies should be made. “We are only here on earth for a short period of time,” he says. “You can’t wait for the budget or worry if it’s too sunny or if it rains – use what you have, because that’s life. That day will never come again.”

It’s raw family cinema, more of a mission than a film. Like the early days of Hollywood, it shoots on the fly, constructing props from solder scrap, and trusting a joyous process as it evolves in front of you. “I only write 40% of the film and the rest is what happens on set,” Isaac says. “If something is missing, the audience will never know – and anyway, we have the VJs to take care of it.” Wakaliwood films are shot primarily in the Luganda language with English subtitles, but are also accompanied by a VJ or Video Jockey. A concept that has its origins in village cinemas, where VJs equipped with a microphone offer live commentary: making jokes loudly, guiding the audience through the plot or even giving their opinion on the fact that what he looks is good or not.

Today, a short film is being shot with the Toyé Cooperative of Kinshasa in the Democratic Republic of Congo, a group of multidisciplinary artists who are currently touring East Africa wearing extravagant costumes made from plastic waste. found in landfills or on the street. It is an avant-garde conceptual style, worn as a protest. 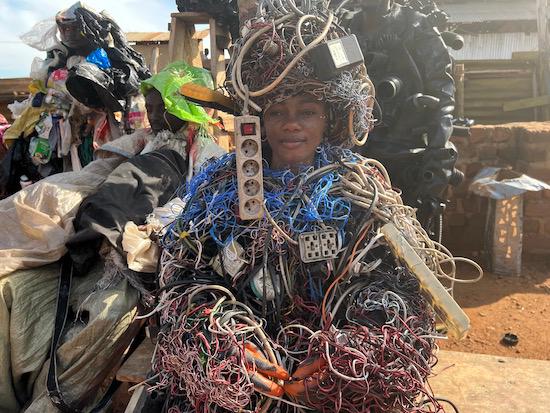 In a world where plastic dominates our lives, Toyé (meaning “we have arrived”) decries that the pollutants ravaging their continent and warming our planet are mostly Western and Chinese. Their desire is to go back: “In Africa, we create biodegradable waste: peels and skins. Even before we understood pollution, we used to compost this way to make the soil more fertile – it’s not a new idea. Recycling for Westerners is simply unloading your problem on others. There’s nothing magical once he’s out of sight. The irony that they can sell their costumes made from trash to wealthy art collectors is not lost on them either. “It’s an opportunity for us to reship some of it,” laughs Eddy.

Patrick (or “Mirror Man”) explains: “That our ancestors sold the land under our feet is vanity. As the most ornate kings, they had yet to see their own reflection, but in the 1300s or 1400s Europeans held mirrors up to them and it warped their minds. 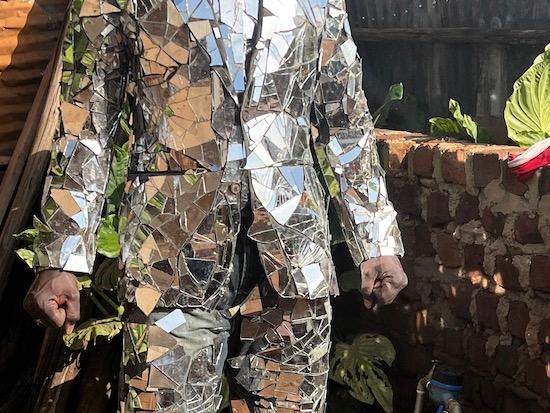 Another action scene is set and the team begins calling Spiritus, who Isaac says will represent nature and present himself as a God among us. Everyone chants “Jajjah Nyege!” as this nimble Congolese artist maniacally rings his bell, never breaking character; electrical energy flowing through its limbs. Covered in dirt and paint, it is practically bare. At the level of the crotch stands an erect phallus in the shape of a carrot. Desperately clutching a statuette to his chest, as if absorbing its power, he faces off to battle an evil muzungu (a white man) controlling a robot made up of a thousand wires and broken pieces of electrical circuitry. There can only be one winner. “I am here to shake consciences, Spiritus will tell me later. “People are too busy partying and sleepwalking through life, so when I wear this between my legs, it’s not just to get women’s attention, it’s for everyone. I’m not here to be subtle.

It’s certainly not an accusation one could level at Wakaliwood either.

As a teenager in the 80s, Isaac vividly remembers the violence and upheaval of Uganda’s civil war, but also the explosion of Hollywood onto the big screens. “I wouldn’t go to movie theaters,” Isaac tells me with rigid pride. “It was more a question of imagination. My friends came back and reproduced what they had seen. It was a eucalyptus forest back then. We were doing somersaults all day – that’s how I heard about Bruce Lee.

Isaac insists that the story they tell today is a neo-colonial story, of a country where people are stunned by the rapid advancement of Chinese-sponsored concrete infrastructure being built all around them. “There are always new stories, but this week we hear that gold and oil are being mined. This is what the gods fight for. For righteousness. Anyone who watches the film will understand.

As we become saturated with golden late afternoon light, Isaac cries, “It’s over! “. Harriet, who has been buzzing on set all day, is beaming. She will now make sure everyone is fed. Toyé’s crew leaves to lead a procession through the village. The rowdiness of the set now made real in Wakaliga is where these two creative entities meet. It’s impossible to tell if CocoMan, clad in rough bark and leaping like a gorilla, is a hero or a villain as the village children approach cautiously in awe, then run for their lives, wading through puddles of water. water and screaming as he jumps and jerks off. their direction. Patrick, as the Mirror Man stops to pose as he struts a sleazy walk – a twisted version of the Congolese Sapeur. The eyes all around are as wide as they are staring.

The parade continues past goats and ducks raging in attack, past channels of thick human waste and young men lying horizontally on motorbikes. Aliens might as well have landed here today. On the roof of a neon-lit shack with Bar California scrawled on its iron doors, a large black bird with a horribly sharp beak joins in a maddening commentary of long, angry screams.

Something different happened, and it charged the molecules enough to electrify an entire village. Posters for politicians, pasted on corrugated iron, peeling off at the edges, ignored. The cakes, wrapped in plastic with names written on them, remain uneaten. Soccer balls on a vacant lot, for the time being, remain unkicked. “It’s beautiful to be here, to engage with people,” Patrick tells me, leaning on his cane – a beacon of hope for one man. 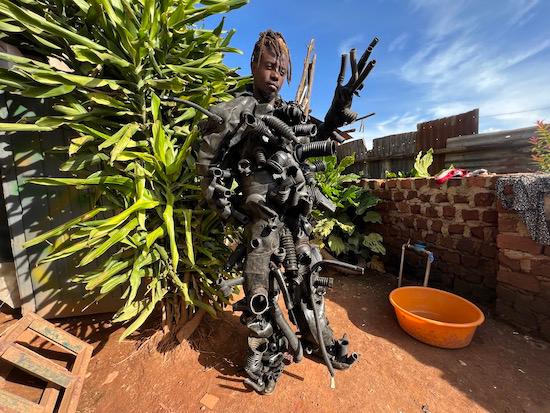 “One of us recently lay in the street at our house in Kinshasa and people thought it was a pile of rubbish ready to be burned. That’s what happens to garbage in neighborhoods like this. We ran screaming ‘NO! NOPE! there is a man in there! and saved his life. A crowd formed to see what was happening, then a woman shouted “LET’S BURN IT ANYWAY!” Patrick laughs now but finds it hard to ignore the terrifying world he struggles to survive in. As it flies away towards the sun, the creepy bird on the roof never stops with its relentless taunts.