Elephants Robotics myBuddy 280, aka myBuddy 280 Pi, is a two-armed collaborative robot for education with a 7-inch screen powered by Raspberry Pi 4 SBC, and also has three ESP32-based M5Stack base modules that help with the internal communication between the motors and the Raspberry Pi board.

It builds on the old myCobot 280 Pi robot with a single arm, with the same 280mm working range, but the new robot offers two arms and a total of 13 degrees of freedom (DoF). The robot is also equipped with two 2MP HD cameras for computer vision, a standard 3.3V expansion I/O interface, a LEGO expansion interface, and can be equipped with a variety of adapters such as suction pumps, clamps, small hands (see below), etc… 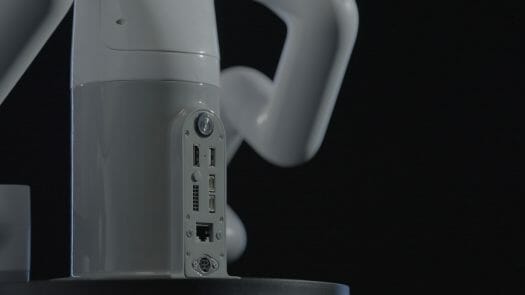 The myBuddy 280 can be programmed with visual programming (myBlockly) or Python which seem to be the preferred programming methods for the education market, as we saw in our recent review of the CrowPi L Raspberry education laptop Pi 4. You can find getting started guides for both, as well as more advanced instructions, including ROS commands, at the documentary site.

Some of the potential applications (for education) include visual sorting with QR codes, playing the piano with both arms, facial recognition, virtual reality control with a VR headset and two controllers emulating each arm, as well as all kinds of fun projects you can think up with a little two-armed robot.

The company has a bunch of resources on the download section of its website for all its robots with Arduino, Python and C libraries, an Android application, firmware for M5Stack modules, and more. Public tutorials aren’t easy to find, but apparently that’s what myStudio software is for. It works on Windows, Linux and mac OS, allows the user to update firmware and provides video tutorials on how to use the robot, as well as maintenance and repair information. 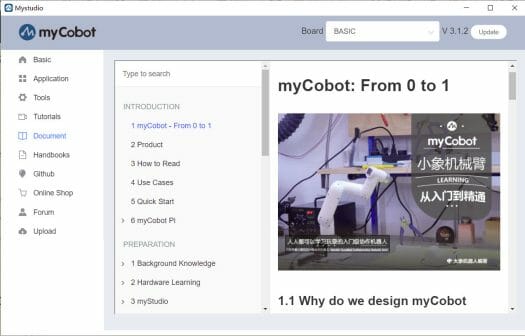 Elephant Robotics myBuddy 280 is sold on the online store for $1,699 and with options including different types of hands (yeah, grab, rent). Suction and gripper are somehow not offered as an option, but can be purchased separately. They also have an Amazon store, but a company representative told CNX Software that they won’t be selling myBuddy 280 anytime soon (not in the next three months). More details can be found on the product sheet.

Jean-Luc started CNX Software in 2010 on a part-time basis, before stepping down as Director of Software Engineering and starting writing daily news and reviews full-time later in 2011.