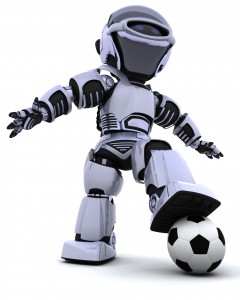 SEOUL, June 10 (Korea Bizwire) – In its new attempt to draw attention to traditional markets which have seen their growth stagnate in terms of sales volume, SK Telecom has decided to organize a robot games competition for elementary school students in a traditional market in Incheon.

Korea’s largest mobile operator has announced that it will hold the “2014 Sin-gi Market Robot Game Competition” scheduled for June 15 at the traditional market in Incheon, some 30 kilometers west of Seoul.

The company said this would be done as part of its community outreach activities to revitalize depressed traditional markets; SKT’s robot-themed event looks pretty smart considering it is well known for its flagship smart robot brands including “Albert” and “Atti”.

The competition jointly prepared by Sin-gi Market and SK Telecom aims to increase children’s understanding of ICT technologies by giving them the opportunity to play with advanced technologies themselves. The competition will take place in three categories of ‘robotic football’ using SK Telecom’s ‘Albert’ smart robot, a robot obstacle course, and ‘Tales Runner’ game competition on a smart gym device.

The robotics market in South Korea

The winners will receive various gifts like the intelligent robot Albert, a smart sports board and the Onnuri gift card, a gift certificate that can be used in traditional markets. 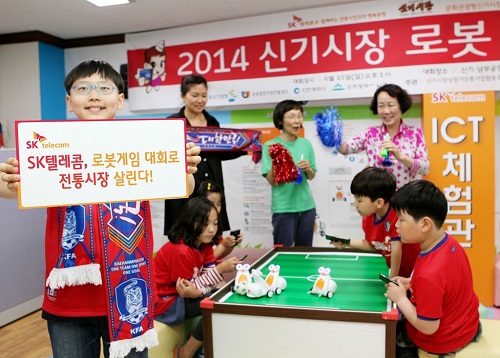 SKT’s robot-themed event looks smart enough given that it is well known for its flagship smart robot brands, including “Albert”. (image: SK Telecom)

The mobile telecommunications operator has signed a partnership agreement with the market to help revitalize it and increase its competitiveness by providing its latest ICT solutions such as My Shop and Smart Flyers, OK Cashbag, market merchant membership programs and the ICT experience space in the market.

The robot games competition was planned as part of the cooperation and is expected to improve the image of traditional markets and revitalize the market with increased foot traffic. Moreover, as children directly experience various advanced ICT technologies, they expect educational effects by increasing children’s interest in ICTs.

A head of customer service at SK Telecom said: “The robot games competition is a new test for the market and children’s ICT awareness. We will continue to work for the revitalization of traditional markets and assume our social responsibility. “