The Macan has been refreshed for 2022, but are the updates worth the higher price?

“If it ain’t broke, don’t fix it” – a proverb that Porsche has taken very seriously since the launch of the 911 in the 1960s. And to this day, the Stuttgart giant follows the same philosophy with all his cars. So it’s safe to assume that the refreshed Macan, which incidentally is also the entry to the Porsche range, will have the historic pedigree and that special feel. To find out, we left the chaos of the concrete jungle to ride on a road that will confirm this hypothesis. A beautiful, scenic but also treacherous and difficult route winding through the high mountains of Maharashtra called Varandha Ghat. It’s full of long curves, tight hairpins and S-bends that mimic the chicanes of the best race tracks. In a word? Porsche territory.

The Macan, in its entry-level version, receives a 2.0-liter turbo petrol engine developing 265 hp. It’s essentially the same engine as the Audi Q5, but you needn’t frown just yet. Porsche has tweaked it to be more… Porsche. It produces 20 hp more than before, but more importantly the engine has a distinct character and a lot more enthusiasm. There’s a sense of alacrity when you accelerate off the line, but it’s also linear up to its 6,800 rpm redline.

Wandering around the city is relaxed and effortless, but in a place like Varandha Ghat, it completely wakes up and comes into its own. Engage ‘Sport’ mode and the excitement is further heightened with crisper engine and gearbox responses. What Sport mode also does is open the valves in the exhaust for a throaty exhaust note with a few pops and crackles. Power is sent to all four wheels via a superbly tuned 7-speed PDK gearbox. 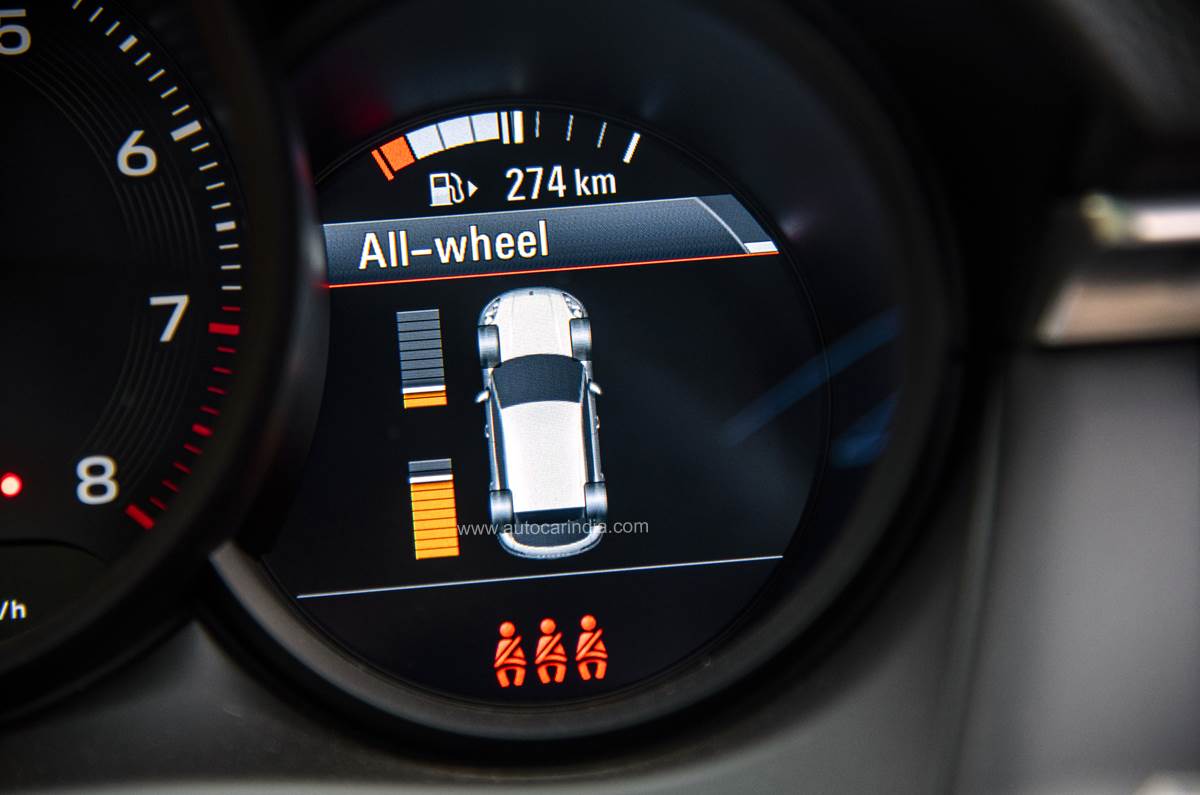 Gear ratios are well-spaced, so when you engage manual mode, it gives you full control of the gearbox via the paddle shifters, taking driver involvement up a notch. Flipping through the paddles when the exhaust slams is reassuring enough that this isn’t a “stock” version. It certainly has the looks you expect from a Porsche. A 0 to 100 km/h is announced in 6.4 seconds, but with a Porsche, straight line speed is not the major asset.

No matter the displacement or the power of the engine, the only aspect that separates a Porsche from the rest is the way it handles. And so it is with this new Macan. Yes, it’s a mid-size SUV, but nothing about it looks like an SUV on a set of twisties. The BMW X3, for example, is a similarly sized SUV that’s also great fun to drive, but it’s definitely an SUV in its handling. The Macan, on the other hand, isn’t marginally better, it’s chalk and cheese how it behaves when you drop it. The chassis, body control, steering ratio and even the suspension setup are all absolutely perfect for a very enjoyable ride. There’s a nice heft to the steering that can feel a bit uncertain in tight city spaces, but it’s so much more rewarding in the right setting. It’s an EPS system, no doubt, but it’s the best EPS system that delivers the most feel and feedback possible. 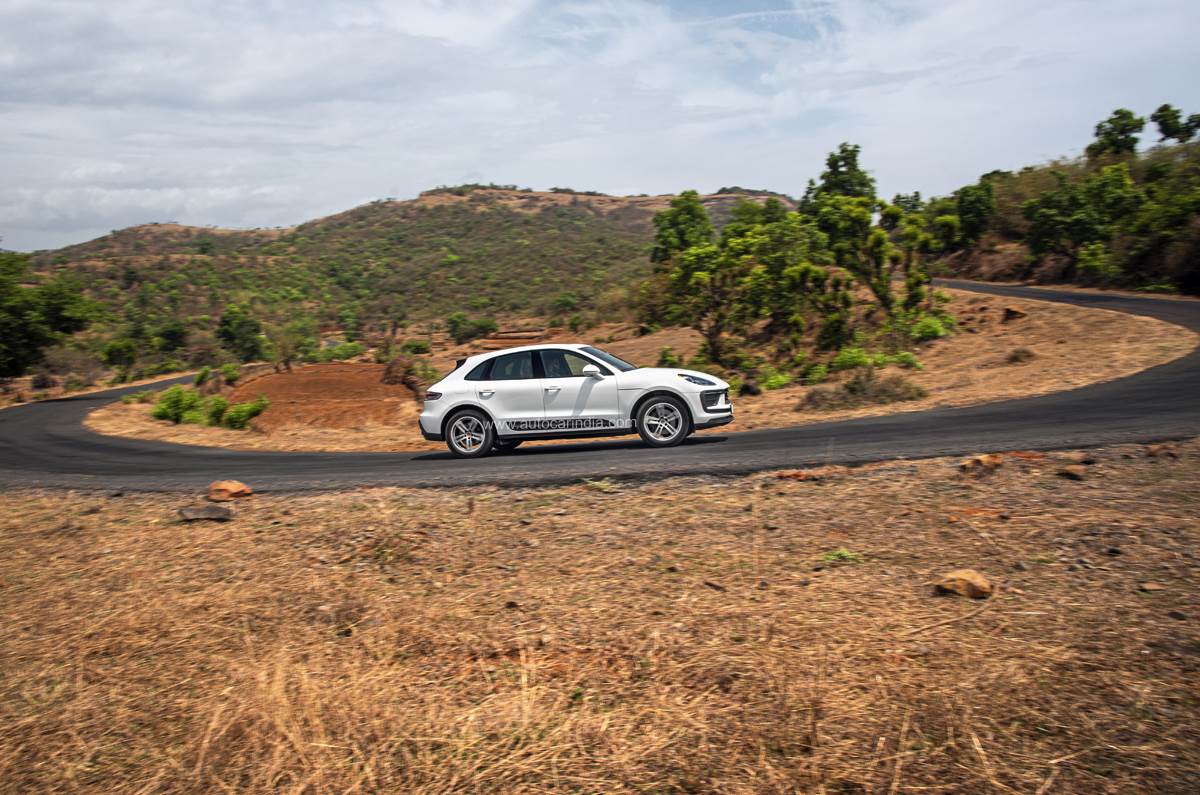 Changing direction is effortless and there’s an increased sense of what the front-end is doing when you’re in the middle of the turn. Something you can’t say about many cars of the present, let alone SUVs. The Macan features a rear-facing all-wheel-drive system that further elevates its handling prowess. There’s not that trailing understeer associated with front-wheel drive or heavy-nosed SUVs. In addition, the larger rear tires ensure that they cling to the tarmac and provide optimum grip at all times while the front tires push the car perfectly through corners.

And on a road like the Varandha Ghat, it proves his courage. It’s by far the best-handling SUV on sale. Sure, the ‘S’ and ‘GTS’ are more powerful and get adaptive air suspension, among other things, but when it comes to a pure, unadulterated ride, even this ‘base’ Macan puts a smile on your face. . 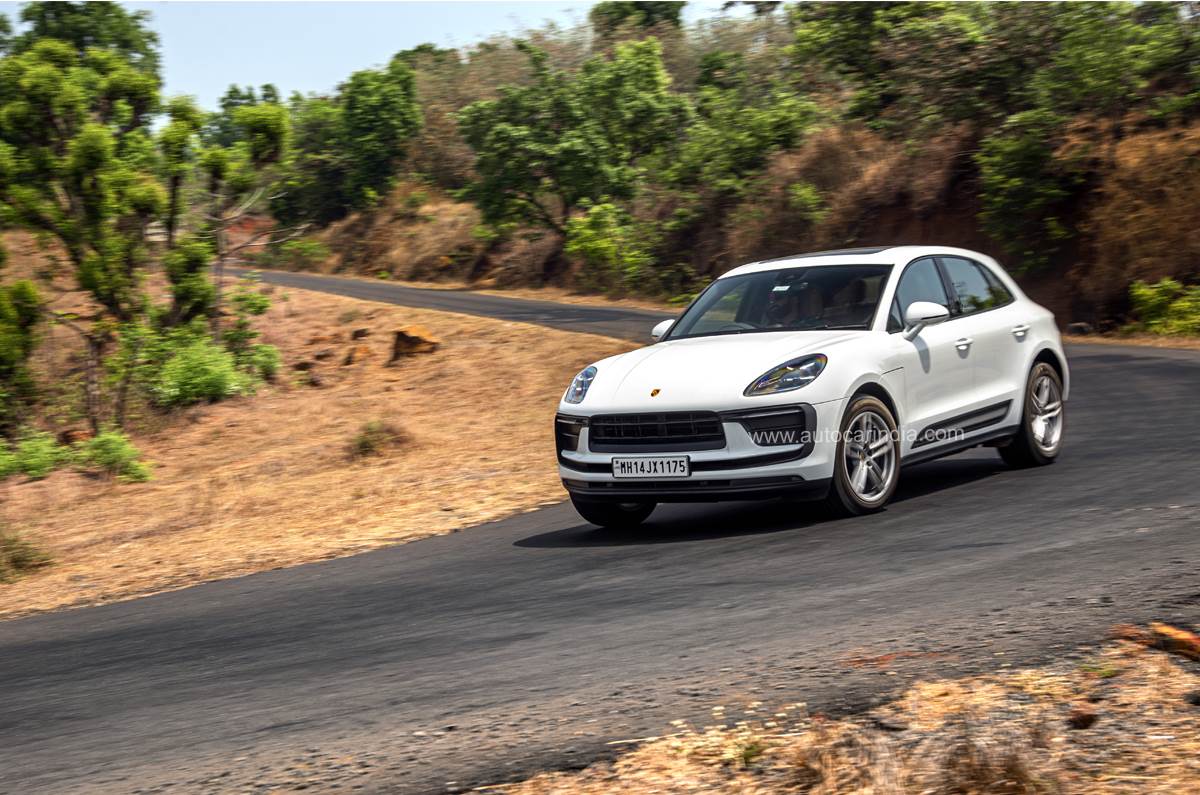 And once you’re done with the turns, you can head back in comfort because the ride quality on the Macan is also very impressive. With 19-inch wheels as standard, there’s enough tire wall to soak up the bumps, but the steel springs are also set up so the bumps don’t really shake the occupants inside. However, if you spec your Macan with larger wheels, it will come at the expense of ride quality. There’s also an off-road mode that adjusts the power delivery when you want to tackle tough terrain. Few owners would want to mess with a Porsche, but if you find yourself at the end of the tarmac, there is a certain resolve.

The refreshed Macan now gets a new interior, and one that’s devoid of the array of buttons we saw earlier. The center console gets a large touchscreen with haptic buttons for most controls, but the HVAC settings still get dedicated buttons that are very clever and very Porsche. They only think about all that. 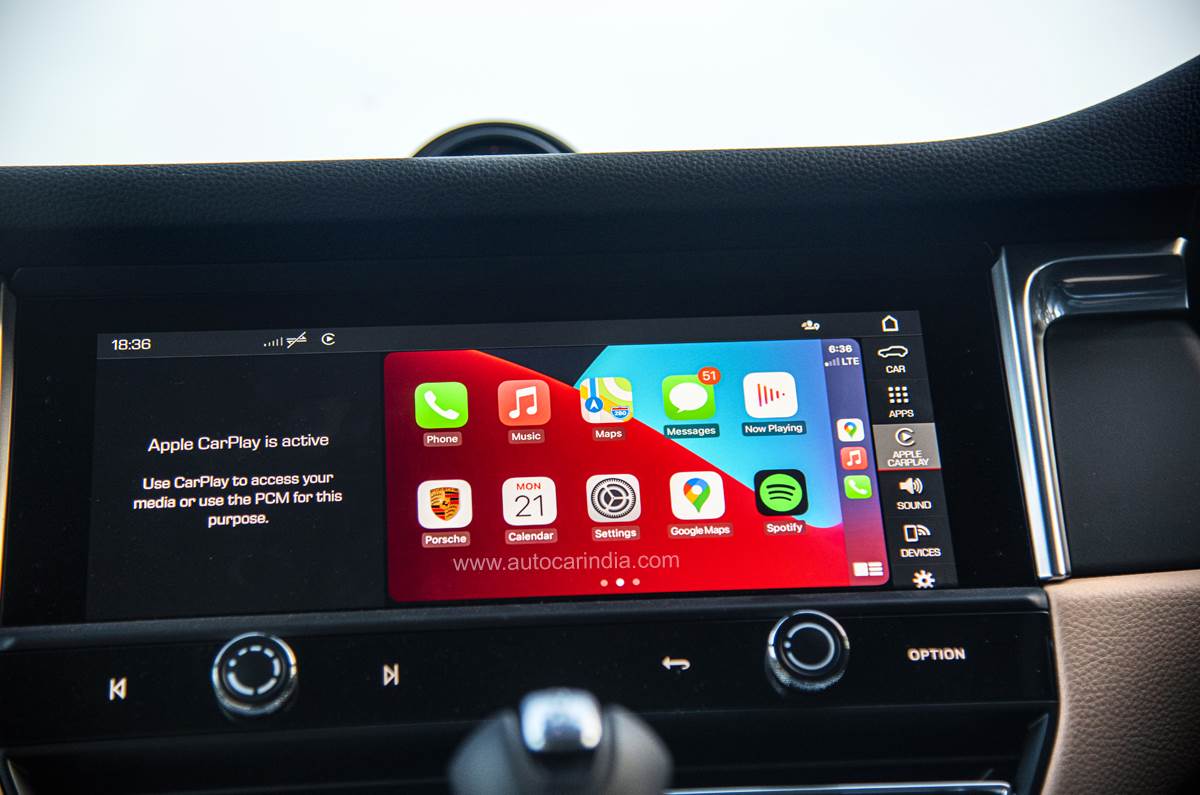 The touchscreen is also bigger at 10.9-inches which is also much better in resolution, but it only supports Apple CarPlay and also lacks wireless CarPlay and wireless charging. But luckily the one thing they haven’t messed with is the instrument cluster. The large analog tachometer in the center as well as the speedo on the left are so reminiscent of classic Porsches. There’s, of course, a nice color MID display on the right which is quite informative, and it also has a tasteful clock on top of the dash where the stopwatch is usually located. The standard upholstery is all black, but you can choose beige and black for a few thousand more. Also in the options list is the panoramic sunroof which costs Rs 1.67 lakh extra, and unfortunately there is no ventilated seats option for the entry level Macan. 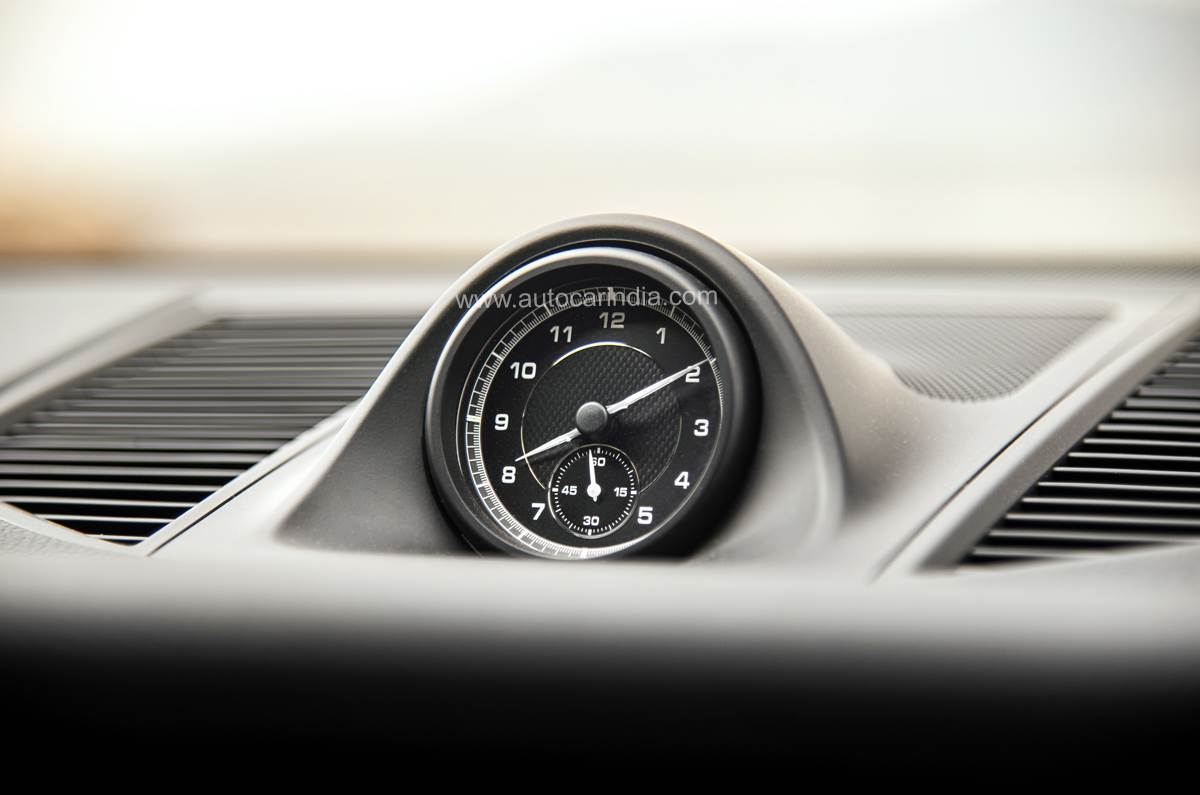 However, what is impressive is the build quality. Even compared to its German rivals, the Macan feels a cut above in terms of finish and stellar quality.

In the rear however, the Macan struggles. You can tell the engineers spent so much time perfecting the ride, that things like practicality and space just took a back seat (pun intended). The racy roofline means headroom is a premium, legroom isn’t impressive either and the rear seats are sufficient for two adults only thanks to a large transmission tunnel. But again, you’re buying a Porsche to be in the front seat, so the suffering in the back might fall on deaf ears.

As is always the case with every Porsche design update, it’s subtle, and on the Macan they’re subtle. It still has the bulbous curves of a Porsche, but look closer and you’ll notice the revised bumpers up front. The ‘tiger claw’ air vents are now attached, with a body colored panel and you also get a new grille and new LED headlights. The pretty clamshell hood remains, however. From the side, the 19-inch wheels and coupe-like design make it instantly recognizable as a Macan, and for those in the know, there’s a new 3D pattern on the black panel at the bottom. 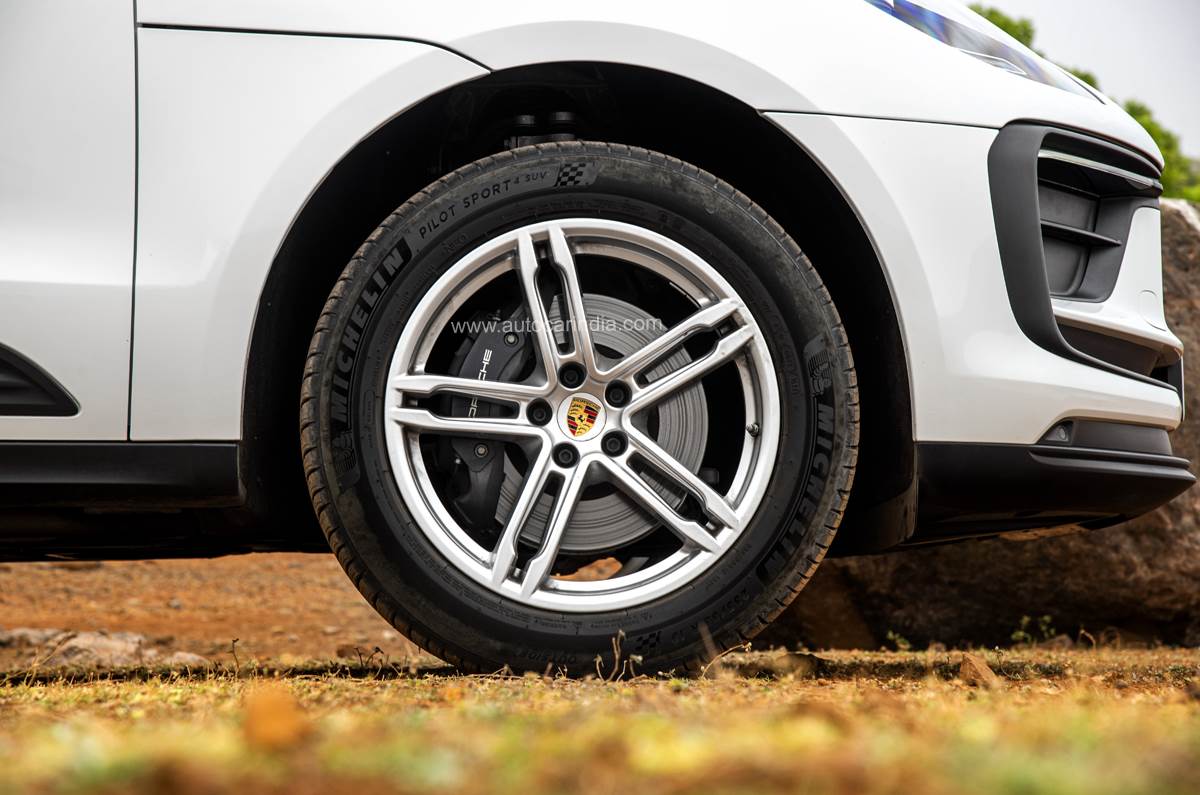 The rear continues to flaunt the long LED light bar and chunky exhausts that don’t just look good. All in all, it’s a fine Macan, and the compact dimensions are one of the reasons it handles the way it does.

Without a shadow of a doubt, the refreshed Macan is very impressive. Sure, the fantastic Varandha Ghat added a bit of bias, but it also confirmed the assumption that every Porsche that leaves the factory brings a little magic. However, there is a price to pay for this elevated experience. The new Macan starts at Rs 83.21 lakh (ex-showroom, India), and that’s before we start to spec it. For reference, in 2019 you could get a Macan S, which had a 2.9-liter turbocharged V6 with 354 hp for Rs 85.03 lakh (ex-showroom, India). If you want the S now, you’re looking at an eight-figure price tag and a whole new set of competitors that make it very difficult to justify the price. 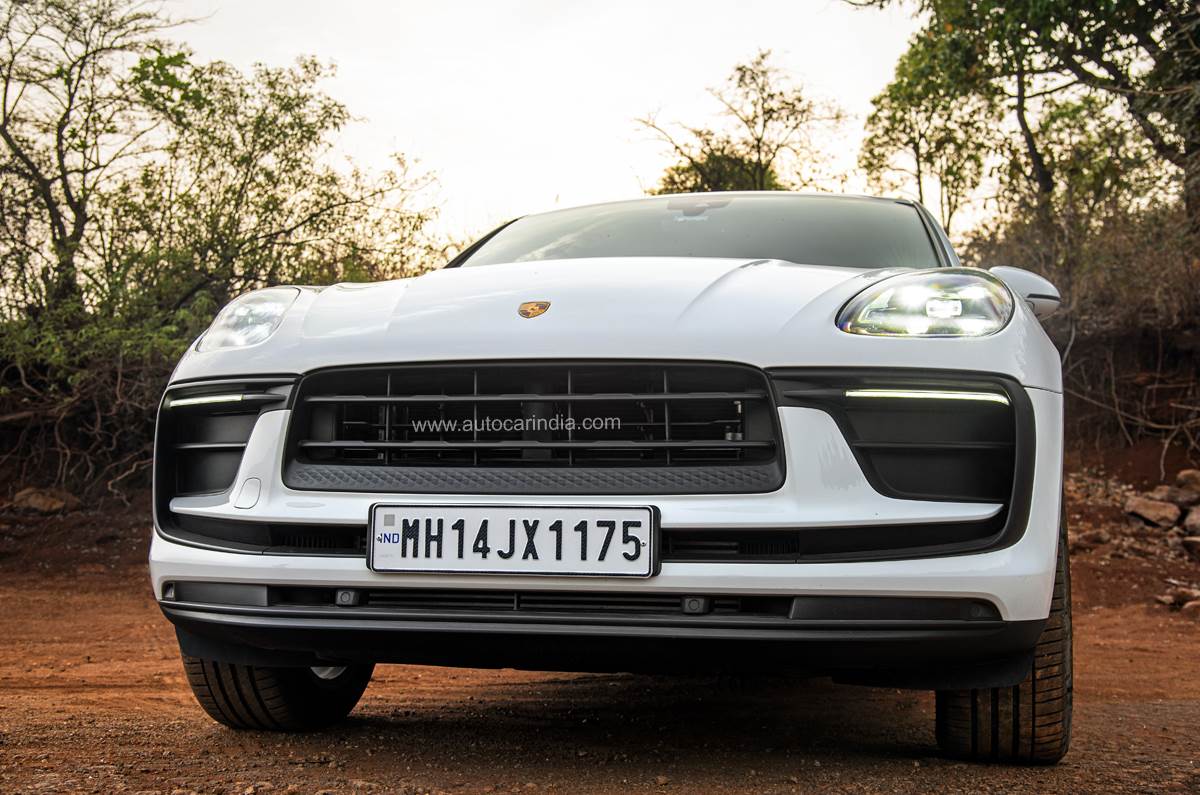 This has always been a point that has tarnished the image of the Macan, and which has deterred many buyers from signing the check. However, if you consider driving prowess over everything else and don’t mind the price or the cramped rear seat, the new Macan is the car for you. It’s rewarding, joyful to drive and no SUV currently on sale in India can match the undiluted experience the Macan offers.