All images are courtesy of NAPUR Architect Ltd.

The museum is part of the larger development of Liget Budapest and marks the first time in the institution’s 150-year history that its collection of 250,000 objects will be stored in a contiguous facility.

The local studio beat out international heavyweights such as Zaha Hadid to win the commission for the project, which the jury hailed as “distinguished by a dynamic yet simple design that harmonizes with the park’s natural surroundings while communicating with the urban texture.” of its environment. .”

As NAPUR describes: “The gently curving lines allow the building to function as a walkway and passage connecting the city and the park. Sixty percent of the structure is below ground level, and thanks to the landscaped roof and the transparency of the sections on the ground, the new museum is adapted to its environment in its scale too. The grass-covered roof will be a pleasant community space awaiting visitors to Városliget. »

“The spectacular hallmark of the building is the glass curtain wall surrounding the landscaped rooftop garden, reminiscent of two intertwined hillsides, with a unique feature, composed of nearly half a million pixels, a weft made by a metal grid based on ethnographic motifs selected from the museum’s Hungarian and international collections.The pixels were inserted into a laser-cut aluminum grid by a special robot, of which more than 2,000 are attached to the building.The small cubes were composed of 20 contemporary Hungarian and 20 international reinterpretations of ethnographic motifs. 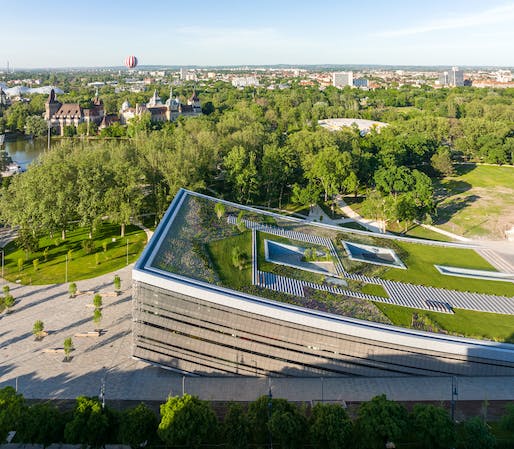 “Creatively constructed spaces will open up new possibilities for communication with visitors, allowing the side-by-side presentation of everyday objects, phenomena and ideas from past and present. The purpose-built museum has been designed with maximum consideration of the required functions, and thus facilitates to a large extent the large-scale, modern and user-friendly operation of the institution, as well as the visually appealing and diverse presentation of material and of the spiritual of humanity. heritage, as well as the collection including Hungarian and international material.

According to the architects, all the novelties aim to facilitate a simultaneous understanding of the heritage of the region and the different aspects of contemporary society. The museum joins Sou Fujimoto’s inspiring House of Music, which opened in January, the new national gallery designed by SANAA and the renovation NEO contemporary art spacewhich opened its doors at the end of 2019.