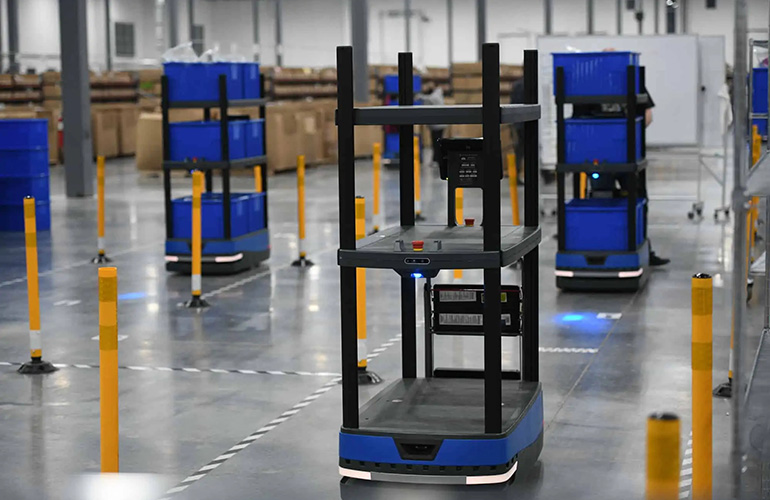 “Execution can no longer be an afterthought as warehouses adapt to rising demand, labor costs and faster SLAs. Our customers need smart, interconnected solutions that integrate with existing infrastructure,” said Rylan Hamilton, co-founder and CEO of 6 River Systems. “Through hardware and software, the enhancements we’ve made to our system allow warehouse operators to increase efficiency, stabilize the workforce and support continued growth.”

When High Priority Chuck is activated, visual indicators such as flashing blue LED lights on Chuck, as well as notifications in The Bridge, signal that the robot is performing an important task. The new feature is available to customers as a software update.

The next new addition to 6RS is “Universal Terminal”, which aims to facilitate associate training with a common user interface. This feature extends the 6RS wall-to-wall solution by incorporating packing and sorting workflows into a single device. The device has a touch screen with the common user interface of the 6RS, which makes training quick and easy.

Runtime solutions with 6RS can now have multiple defined and independent work areas running on a 6RS environment with the new “Work Areas” feature. These working areas can be several superimposed warehouse mezzanines (vertical) or separate operating areas on the same level (horizontal).

Finally, 6RS announced new Chuck accessories that improve operational efficiency, flexibility and safety. The company developed a workspace tray to speed up tasks such as splitting boxes and counting small parts. The company has also added vertical and European ladder support, allowing associates to carry ladders with them to reach referrals higher on the racks.

In July, GXO announced a multi-year global agreement with 6RS to use the company’s AMR in its logistics operations in the United States and Europe. GXO is looking to expand its use of technology to meet the logistics outsourcing demands of current and new customers. By adding 6 River’s robots to its operations, GXO is reducing employee walking distances by allowing robots to shuttle between warehouses and speeding up operations.